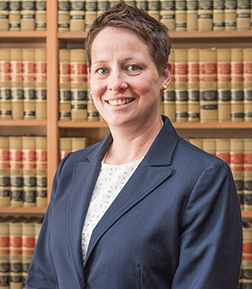 Holly was a prosecutor for Schuyler County, a position she held for two years, and was also a Public Defender for Schuyler County for three and a half years. In these positions, Holly tried several criminal and family court cases, including misdemeanors, felonies, child neglect/abuse and custody. Holly was then a solo practitioner for nearly three years, during which time she became certified by New York State to represent children and has served as an Attorney for Children on the panels for Schuyler and Chemung counties. Holly previously worked for the Friedlander law firm while in law school and returned full time in February 2014, where she has concentrated her practice on Nursing Home and Title IX cases.

As an advocate for victims of nursing home abuse and neglect, Holly has helped families get justice for their loved ones by holding nursing home owners (private, corporate and county) accountable for failing to provide the quality care that is required to be provided to nursing home residents under the Federal and State rules and regulations, and the New York State Public Health Law.

Holly has represented victims of campus sexual assault, by advising students who have been assaulted so that their rights throughout the Title IX process are protected.  Once a complaint is made to the Title IX office, it is important that the victim has independent representation to ensure they are being treated fairly, that the school is providing necessary accommodations to the victim, and that they have counsel to assist them at all stages of the investigation, at a hearing and if there is an appeal.

She is a person who actually listens and cares about what her clients wants. If I need an attorney again I will not hesitate to call on her. She’s a great person and family oriented i would tell anyone in need of an attorney to call her. Even if she cant help you she knows someone who can. I give her an 11 out of 10 stars if I could.